However, what does this mean for the now discontinued Rolex Daytona 116520? Did demand falter? Nope. The Rolex Daytona ref. 116520 is still very much a coveted luxury chronograph thanks to its classic style, famous name, and reliable movement. Now only available in the pre-owned luxury watch market, the Daytona ref. 116520 is still enjoying immense popularity 18 years after its debut.

Prior to 2000, Rolex Cosmograph Daytona watches all ran on outsourced movements that were then modified by Rolex. Early generations of the Daytona from the 1960s until the late 1980s were powered by manual-wound Valjoux movements, while automatic Daytona chronographs from 1988 until 1999 were equipped with Zenith El Primero movements.

Rolex changed all that with the launch of the in-house Caliber 4130 automatic chronograph movement. With the release of this manufacture caliber, Rolex could now claim all of their movements were made in-house—a big deal for any luxury watch brand. 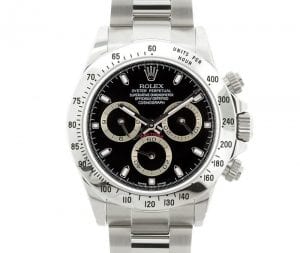 Naturally, to house the new Caliber 4130 movements, Rolex presented a whole new line of Daytona models with six-digit reference numbers. The steel versions were the Daytona ref. 116520 and the demand for these Rolex chronographs skyrocketed—much like the latest ceramic Daytona steel watches. Although there are more precious versions of the six-digit Daytona in gold, two-tone steel and gold, and even platinum, the steel editions are the most popular by far.

Even in the early portion of 2016, it was basically impossible to walk into a Rolex boutique to buy a Daytona ref. 116520—the waitlist was still going strong!

The Daytona ref. 116520 includes a 40mm steel case with a steel bezel engraved with the tachymeter scale, two screw-down chronograph pushers flanking a screw-down winding crown and a steel Oyster bracelet. The watch comes with the option of a black dial or a white dial.

Despite the fact that Rolex replaced the Daytona 116520 with the 116500, the former is still enjoying plenty of popularity. There are a handful of factors that play into this. First, the vintage Daytona market is extremely hot right now—especially with the record-breaking sale of the Paul Newman’s own Daytona for $17.75 million—which has captured plenty of attention for the Daytona collection in general. 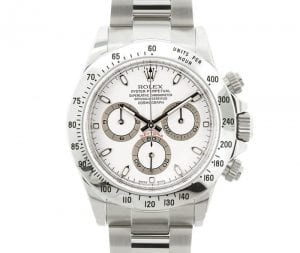 Then, there’s the fact that the new ceramic Daytona 116500 is extremely hard to get unless you’re willing to pay more than double the suggested retail price.

Lastly, and perhaps most importantly, the Rolex Daytona 116520 sports a style that is so iconic in the luxury watch space that it’ll never go out of style. It looks as good today as it did almost two decades ago—and will continue to do so for many more years to come. And that is a watch worth investing in.